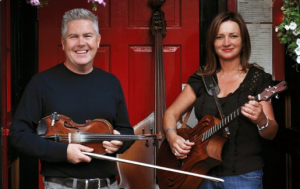 School is not yet in session but anyone who loves Irish music will be in school this weekend – the Four Corners School House that is.

On Saturday, August 15, the Vermont School of Irish Traditional Music presents Tommy McCarthy and his wife, Louise Costello at the Four Corners Schoolhouse in East Montpelier.

Fiddler Tommy McCarthy and his wife, accordion and banjo player Louise Costello, are known in New England as owners of the Burren Pub in Somerville, MA, a premier venue for traditional music in America. But more importantly, they are top-shelf musicians from noted Irish musical families and have just recorded a beautiful new CD, “Grace Bay CD.” It’s appropriate that they will be joined in concert by some of the next generation of McCarthys: their daughter Rose on fiddle and nephew Peadear.

There is much more Irish and Celtic music to be played and listened to before school actually begins. Here are a few more concerts not to be missed: