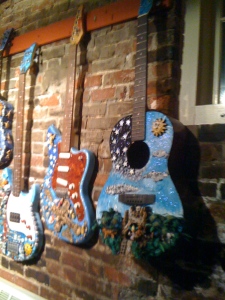 As you probably know Boston has a huge Irish community, so seeing great Irish music is commonplace around Beantown. This past weekend was no different. Last Sunday I headed down south and visited one of my favorite parts of the city to enjoy some music from some of my favorite Irish musicians, John Doyle and Karan Casey, who flew in from various places after performing at Glasgow’s Celtic Connections.

They played at Club Passim, a very intimate folk music club in the basement of this cute little building in Harvard Square. The house was jam-packed with not an empty seat to be found. It looked mostly like a large basement surrounded by walls with uniquely painted instruments hanging on them. And though it felt like I was a human sandwich squished between unfamiliar bread it was still quite the amazing venue for such an intimate concert.

As you know, both John and Karan were part of the original band Solas and have been playing together for quite some time. What I loved most about watching these two perform, was that it was evident that they both seemed excited to be playing with one another. Karan had this sense of  “he’s got my back, I’m just going to sing my heart out,” as John lead and followed on the guitar (and sometimes bouzouki) creating rhythms and harmonies that complimented her poignant voice.

Most of the music they played came off their latest duet album, Exiles Return. Sprinkle in a few sea shanty’s and one of my Solas favorites Newrytown Highwayman and you got yourself a kick-ass show.

They were quick with the jokes, and rearranging the set list and it was clear they were having as great a time as we were. At one point they both were laughing so hard that they had to restart a song 3 times. To me that shows, humanness. It shows that even the best can have blunders and still perform an outstanding show. Karan ultimately ripped up the set list and I literally felt like they were in my living room just having a good time and playing music.

Though the venue was tiny and the waiter completely forgot to deliver our wine, it was truly a night to remember.